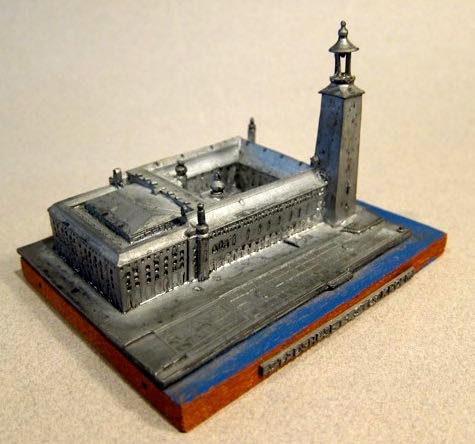 Russell K. shares the following: “These are two acquisitions that I consider as the most unique added to my collection as a result of the SBCS event in Nashville. Both represent major architectural monuments in Stockholm, Sweden. My wife and I have visited them during our travels to Sweden. I had not previously seen these souvenir buildings. They were formerly part of the collection of Pat Smith. Based on the number of other Swedish souvenir buildings I purchased at the swap meet that were part of her collection, I would assume she bought both pieces in Sweden. Joe K. had also brought a large number of pieces of travel literature that Pat had collected and my wife and I were pleased to be able to take a number of them that related to Scandinavia.”