Front Cover of Banthrico Buildings, Then and Now by Lance Oldham 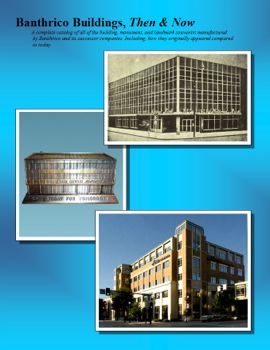 SBCS President, Joe Kopitz, states “I think that this is such terrific opportunity for our website and the SBCS. It adds such great value for our members and makes Lance’s hard work available to those who seek it most. Such a win-win.”

Lance has been a member of the Souvenir Building Collectors’ Society since 1995 and a member of the Still Bank Collectors Club of America since 1990. He is a frequent contributor of articles to the journals of both organizations. In writing Banthrico Buildings, Then and Now, Lance says, “My primary intent was to develop a database that could be used in writing comprehensive, detailed articles for collectors’ journals.”

In accomplishing his objective he not only provided the souvenir building and still bank collector communities with the specifications relating to the miniature replica building, but has conveyed the historical context of the actual building. For example, the Coast Federal Savings and Loan Association of Los Angeles issued a bank in 1961 that was a Rabbit looming over a replica of their building on Hill Street in Los Angeles. Lance’s data sheet not only covers the issue date and dimensions of the replica, but also supplies pictures of bank advertisements utilizing the Rabbit or “Bunny Bucks” as it was later known. There is even an advertisement depicting the Rabbit Bank, itself.

The book illustrations are colorful, informative, and instructive. The organization is outstanding. If you ever want to develop a catalogue of your collection, Lance has laid out a format that makes you want to start doing it today.

View all posts by Bookend Collector