Conventional wisdom is that there is no “there” in Downtown Los Angeles. Hollywood, Beverly Hills and Santa Monica have often eclipsed the original city core in imagery of Southern California. Downtown Los Angeles, now often referred to as DTLA, has always been an important center in Southern California and grew exponentially during certain periods. One era when DTLA experienced growth was post World War I through the 1920’s and into the 1930’s. Many examples of urban buildings during that era currently exist in DTLA, though many were threatened by commercial and governmental growth in the late Twentieth Century.

Join us for a walking tour of several of the prime examples of the Art Deco genre of commercial and government buildings that have endured, clustered around the Pershing Square hub in the downtown area. The Los Angeles Conservancy has arranged this two-hour tour and was directly involved in facilitating preservation of many of the buildings through innovative reuse and rehabilitation strategies. 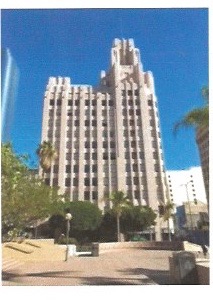 We will take a chartered coach from our Convention Hotel, the Embassy Suites LAX North to Pershing Square and return after the tour. The cost is $30 per person. Chris Spry will be leading the tour. He has recently become a certified Los Angeles Conservancy docent for this tour.
Extra! Extra!
As this post was being prepared, TIMEOUT Los Angeles posted an excellent capsule of influential buildings shaping the Los Angeles architectural landscape. The post includes references to buildings we will see on our two tours, the Eastern Columbia Building and Frank Lloyd Wright’s Hollyhock House. They also mention father and son architects, John and Robert Parkinson, who also have buildings represented on the Art Deco Tour! Take a look by clicking here: TIMEOUT Los Angeles