In 2002, the following article on “Souvenir Buildings in Lucite” by Scott Daniels was published in SOUVENIR BUILDING COLLECTOR, Volume 9, Number 1.  It is apropos for the upcoming Kneisel Collection Flash Sale 3: Lucite Embedded Buildings.

We have seen them at yard sales and gift shops around the country: a building or monument trapped in a Lucite cube, rectangle, hexagon or pyramid.  Buildings in Lucite are a recent addition to the history of souvenir buildings.

The manufacturing of Lucite embedments (which is what buildings in Lucite are considered) began shortly after World War II.  It has remained on the best-kept manufacturing secrets, passed down to trusted associates.  Because of the highly technical knowledge required, and the amount of discarded material, the total number of manufacturers is very small.

Lucite is a high quality form of acrylic that is a mixture of acrylic resin powder and monomer, a crystal clear liquid.  The versatility of Lucite allows it to be custom designed into a variety of shapes and sizes, incorporating many different types of embedded elements.  However, due to the chemical reactions during the process, not everything can be embedded.  All pieces are hand-made and involve a long tedious productiion process involving:

The first step – if necessary – is to print the building name and/or the event on the base.

The next step is to mix the resin powder and monomer in specific proportions.  The result is a thick opaque liquid.  The mixture is hand poured into molds and allowed to partially harden.  At this point the building is hand placed into the Lucite layer.

Most embedments are either plastic or metal.  Other collectors have told me that you can tell whether a piece is plastic or metal by the way the light reflects from it. If it appears dull it is most likely metal.  If it gives a bright reflection, it tends to be plastic.

Another layer is poured over the embedded object and the Lucite is again allowed to harden.  During this stage of production the liquid Lucite is an opaque, milky white.  It is very difficult to center objects on multiple levels because you cannot see the objects below clearly.  Because the buildings are placed in the moulds by hand, no two Lucite pieces are ever 100% alike.

At this point the molds are cured.  The hardening Lucite molds are placed into an oven.  There, heat cures and pressure squeezes out the air bubbles, to completely harden the embedment. The curing process takes up to seven hours.

After cooling, the Lucite embedments are removed from the molds, and the sizing process begins.  All Lucite parts are cast oversized to allow for shrinkage.  There are three steps taken to size the embedments.  The objects are ground down to size by hand on large industrial sanders.  A coarse grit-sanding belt is used first, followed by a medium grit belt and a final sanding with fine grit belt.  This makes it easier to polish, which is the next step.

Polishing, just as sizing, is all done by hand.  Polishing brings out the luster and high gloss of the Lucite not seen during the entire production process and also gets rid of the sanding lines.  Once there is a bright crystal-like finish the production of the Lucite embedments is complete.

The final phase of the Lucite process is the inspection.  Each piece is hand wiped and visually inspected.  If there are flaws the part is returned for additional finishing or rejected outright and recycled.  Once the piece passes, it is boxed and shipped out.

Some of the first buildings in Lucite date from the 1950’s.  The miniature of the Seagram’s building in New York City encased in Lucite was made around 1957 as a Lucite display lighter.  I guess there is no better way to showcase a modern building than to use a modern form of displaying the miniature version and making it useful at the same time.

During the 1960’s many more buildings, including the The Metropolitan Life building in New York City, were produced.

One known to many collectors is the Travelers Insurance Building in Hartford, CT.  About 1000 pieces were made to celebrate the 100th anniversary of the company (1864-1964).  They were given away to Travelers employees and representatives over the U.S.  It is a very impressive piece, with all the Travelers buildings that occupy a full block in the city. (This is an update to the bronze inkwell given out in the 1930’s).

Another group of buildings embedded in Lucite are the Knights of Columbus convention pieces.  They consist of Saint Joseph’s Oratory (Montreal, Canada), St. Patrick’s Cathedral (New York City), and the Immaculate Conception (Washington, DC).  The Saint Joseph’s Oratory was given out at the 1967 85th Supreme Council convention.  St. Patrick’s Cathedral piece was given out at the 1979 Supreme Council convention, and the Immaculate Conception was given away at the Supreme Council meeting in 1989.  I’ve noticed that all the buildings encased are made of pewter with fine attention to details.  They are well worth having in your collection.

In the 1970’s Lucite had reached its zenith with buildings of tourist sites being embedded in Lucite.  Sites such as Elvis Presley’s Graceland in Memphis, TN; Seattle’s Space Needle (in various sizes); buildings in Washington, DC and across the nation were very popular at tourist shops.

Just as the production of souvenir buildings declined in the late 70’s and early 80’s, when they were replaced by T-shirts and coffee mugs, so did their Lucite counterparts.  It just wasn’t cool to bring home a cube.

Most of the current Lucite buildings that you can buy at gift shops are from this time period.  They were just never big sellers in shops.  Some exceptions to this are the current John Hancock Tower in Chicago and Independence Hall in Philadelphia. 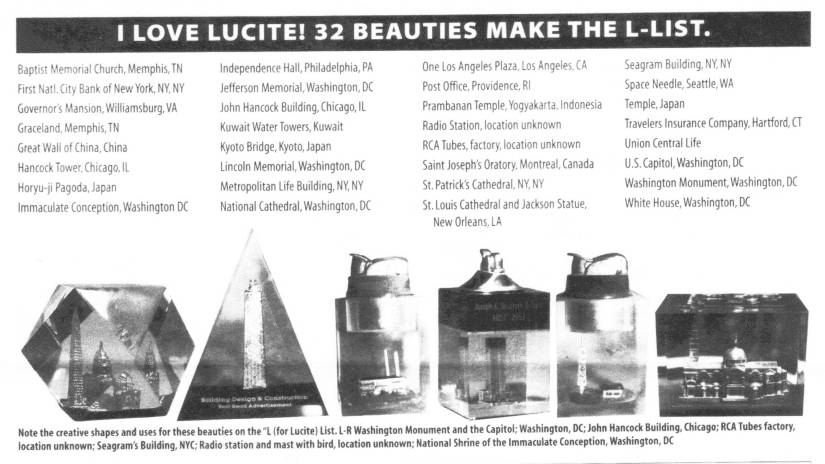 Many Lucite buildings can still be found everywhere and in every size.  So the next time you come across a few have fun with them.  Build a building block building with buildings inside!